Today is a pear and fig tart.  With the crispness which has crept into the morning air I have been reminded of autumn in western New York.  Complete with fall foliage colored in reds, orange and yellow.  The air scented with cider donuts, apples and spices including cinnamon and clove.  It used to be apples that heralded the change of the seasons, but here in southern Oregon, I suspect that it is figs and pears that mark this transition from the growing time to the harvest time. 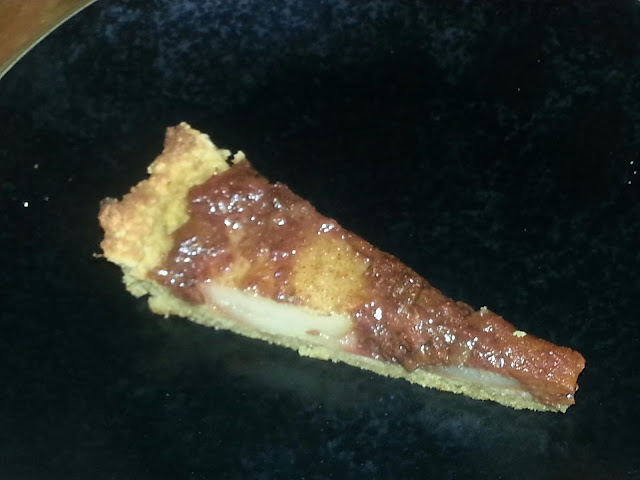 The crust for the tart was sweet and crumbly, and may be my favorite part with the addition of cinnamon, cloves, a dash of nutmeg, or what ever flavors you and your family enjoys.  The crust for this tart is so good I have already made it twice in the past few weeks.  Though each were slightly different, initially being made with pears and topped with a plum- berry sauce.  Most recently with figs and no extra sauce or jam.  The pears were collected locally along with the figs used in this weeks version.  The crust was inspired by this one at My little sweet desire.

When trying to  limit dietary allergens whether they be anaphylaxis, also referred to as type one hypersensitivity, or delayed type of type four hypersensitivity, it can be frustrating with the lack of choices or feeling that one has to settle for sub par tasting food in an attempts to feel well.  I apologize if nuts are your sensitivity, unfortunately this recipe is not a good choice you.  If you try it with a different flour and have a success, please let me know. It is always helpful to know if multiple flours produce a satisfactory end product. 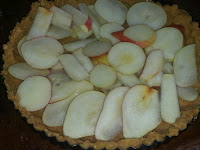 Preheat the oven to 350 degrees Ferinheight.  Cream together coconut oil and sugar with a pie cutter or a fork.  When well combined add the remaining dry ingredients.   Press the crust into a greased 8 inch tart pan. The crust can be sticky so having a dish of water to hand to keep your fingers moist can be helpful. Place the pears and fig slices on top of the crust.  At this point they can be dusted again with ground cinnamon and clove. The pears and fig can easily be arranged in a more uniform orientation for a prettier picture.  Bake for 30-35 minutes or until the top edge of the crust is a golden brown.  Let the tart cool on the stove top for 15  minutes before removing the tart base from the side ring and resting on a cooling rack for at least another 15 minutes.